Parrotta Studio began in 1946, when Mr. Thomas D. Parrotta opened his photography studio in East Rochester, New York. Enlisting in the Army in 1941, he rose from the rank of Private to CWO (Chief Warrant Officer) for the Army Air Corp (now known as the US Air Force), Mr. Parrotta supervised the Base Photo Labs in Hobbs, New Mexico, the training school for B-17 fighter pilots. After his tour of duty Mr. Parrotta returned to East Rochester to begin his photography business and continued until his retirement in 1984. Through out his career he was active in the Professional Photographers of America and the Professional Photographers of New York organizations often competing in national photo competitions. 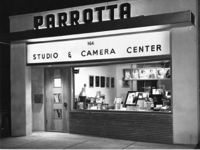 As a young apprentice, David worked closely with his Father to learn the photography business and continued to work in the studio until 1984. (The retail camera store and studio that served as his Father’s base of operation, closed after his father’s retirement in 1984).